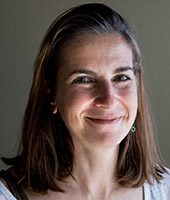 For more than 2 decades, Maria has been involved in projects that combine interactive technologies with education and culture. She founded in 2003 and co-directed makebelieve, an experience design and consulting company. Previously, she established (in 1998) and directed (1998-2003) the Virtual Reality Department at the Foundation of the Hellenic World (FHW), a cultural heritage institution based in Athens, Greece. At FHW she was responsible for recruiting a team of artists and programmers, setting up the VR exhibits & infrastructure, and managing the research, design and development of the VR programs and related visitor experiences. For most of the nineties (1993-1997), during her extensive work with the CAVE® at the Electronic Visualization Laboratory in Chicago, she focused on the design, application, and evaluation of virtual and digital media environments for education and the representation of cultural information. She has also collaborated with many museums, such as the Acropolis Museum and the Walker Art Center, where she helped to design and create interactive art education material for the Web.

Maria's projects and collaborations have been featured internationally at events such as ACM SIGGRAPH (1993-2002) and the Ars Electronica festival (in the 90s, with her artwork as part of the permanent collection of the museum), she has been a regular member of the program and organizing committees of numerous exhibitions and conferences, has lectured extensively, and serves as Expert Evaluator to the European Commission FP5, FP6, FP7, H2020 funding programmes. She is also on the Board of Trustees of the Institute for the Visualization of History, Massachusetts, USA, and on the Editorial Boards of journals including ACM Journal on Computing and Cultural Heritage, International Journal of Child-Computer Interaction, and Multimodal Technologies and Interaction.

At the University of Athens, Maria teaches the 4th year undergraduate course in Human-Computer Interaction (since 2008), the 2nd year undergraduate core course Design and Use of Database Systems (since 2017), and the graduate courses Interactive Systems (Virtual Reality), Data Visualization, Digital Technologies for Cultural Applications, and ‘Museums and New Technologies’ (since 2004). Additionally, she has taught in the past (2013 - 2015), graduate level Web Design and Development, Advanced Web Development with Content Management Systems, and User-Centered Design for the Digital Communication and Social Media Master's program at the American College of Greece.

She is an active member of a number of professional organizations since the mid ‘90s, such as ACM (Senior Member since 2020, Greek ACM SIGCHI Professional Chapter Chair 2011-2019 and Vice Chair since 2020, Greek ACM-W Chapter Vice Chair since 2018), IEEE, and ICOM. Maria is the recipient of the 2013 Tartessos Award for her contribution to Digital Heritage and Virtual Archaeology.